Some days, it feels like good news is hard to come by.

Going as far back as 2013, Fuquay-Varina resident Jason Wunsch noticed a lack of positive news coverage in southern Wake County.

Community newspapers like The Fuquay-Varina Independent and the Southwest Wake News started to downsize and shut down, so Wunsch, who is an attorney and a Fuquay-Varina commissioner, decided to launch the Today in the Quay Facebook page.

“One of the things I saw that was missing, that I could really give back to the community as a public servant, was that the local newspaper had left right prior to my starting as a commissioner,” Wunsch says. “That was the evolution of Today in the Quay, with the spin that I was going to report on only positive news. Commissioners bring all sorts of things to the table — I saw that as my personal contribution.”

In March of 2014, Wunsch crafted his first post on Today in the Quay. The page’s content focused on happenings around town, sharing local information and taking uplifting news submissions from readers.

“At first I thought it was going to be a little page, one more opportunity to hear about things that were going on in the community. Maybe I would have 1,000 followers if I was lucky.

“I would go out looking for stories, and I would share things that were going on with the town board. It enabled me to get plugged into the community,” he says.

As a Fuquay-Varina Commissioner, Jason Wunsch founded Today in the Quay as a service to the community.

For the first year, the page maintained around 600 followers. Then, like the town of Fuquay-Varina itself, Today in the Quay experienced a period of explosive growth.

“There were a few key stories that really just blew up the page,” Wunsch says. “One was the announcement of the splash pad in Fuquay-Varina. Another one was when I started covering youth sports. … Then I started getting more into what’s coming to Fuquay-Varina, and people started sharing their plans with me.

“Before I knew it, I was a full-fledged daily paper, and then the page really started to grow.”

By 2017, three years after it’s inception, Today in the Quay had 10,000 followers (the town’s population at this time is around 29,000), and Wunsch was posting multiple times a day.

“It’s very time consuming, but it’s a great service for the community,” he says.

Along the way, students from Southern Wake Academy, college interns and even the Bob Barker Company have lent assistance to the page, but Wunsch has always remained the primary driver.

“What a great job Fuquay-Varina is doing, making you laugh and getting information out to you through government pages, and so I said, ‘This is something I am going to keep doing.” 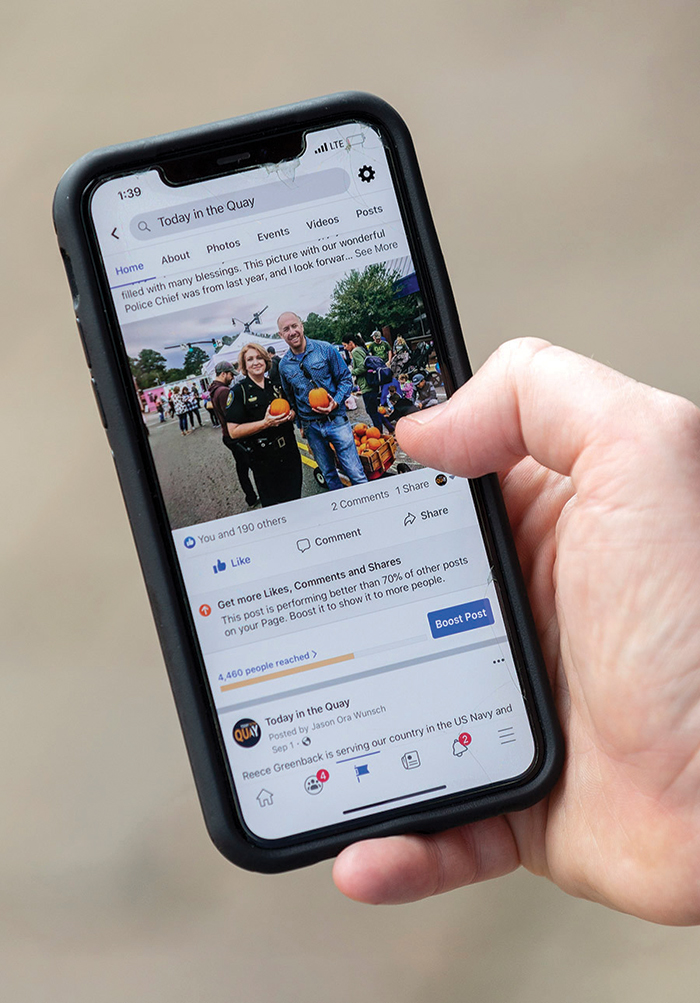 Wunsch’s earliest inspiration came from his mother, who wrote a positive news column for the Asheville Citizen, in which she “caught” people being nice in the retail sector and shared these heartwarming experiences in her articles.

“(Today in the Quay) is a reflection of the life that I’ve tried to live — trying to focus and stay on the positive,” he says.

Positivity is natural for Wunsch, but that’s not the case for all of his followers.

“The last few months have been very tough. There’s been a lot of negativity online.

“I try to delete bad language, and look for people who are insulting. … There are other pages you can go to online where you can get into argumentative discussions, but not on this page,” he says.

Another conflict Wunsch faces is because of his service on the town board — a position he loves.

“A lot of times people will say, ‘It’s hard for you to be objective when you are on the board … and you are always painting the town in a positive light.’ And I would agree that is a conflict. Even though I think we are doing a phenomenal job as a town, it is hard to be an objective reporter when you are one of the board members making those decisions.

“When people would come on the page and criticize the town, I’d often take it personally.”

Wunsch’s term on the town board expires next year. He’s considering running again, for what would be his third term.

“I’ve enjoyed it so much. I feel like it’s given me the opportunity to work as a team to make a dramatic impact in the community,” he says.

Today in the Quay currently has 19,100 followers and has been awarded “Best Blog in the Triangle” by INDY Week two years in a row.

“At the end of the day, I want everyone to know how wonderful we are in the town of Fuquay-Varina. Not just the government, but the people. It’s a neat town.”