Ah, springtime. The sun is shining, the fresh stench of trash love is in the air and let’s face it, the Bradford Pear trees you planted last fall smell like nature’s farts. Thanks to North Carolina’s drunk weather, you can enjoy roughly 45 minutes of warm sunshine before the guy down the street starts burning pine needles, and Karen, who knows the town ordinances by heart, calls the fire department and raises hell.

In addition to experiencing all four seasons in one day, why not head over to Home Depot and score some sweet Adirondack chairs to pair with Nance’s porch lanterns? THE POSSIBILITIES ARE ENDLESS! Unfortunately, residents of Fuquay and Holly Springs have some springtime quirks that ruin the good times for all of us. Here are ten annoying habits to avoid this spring.

Don’t act like y’all haven’t seen it. Hundreds, nay, thousands at least 20 guys in skin tight spandex channeling their inner Lance Armstrong in the middle of Piney Grove Road. Oh, you think you can pass them on the left? Nope, they move in herds and cycle like they’re literally on fire. Good luck distracting the pack with a honk of the horn. The warmer weather has unleashed cyclists’ inability to notice the car that’s about to plow them down inner speed demons, and THEY ARE IN THE ZONE.

We’ve all heard the saying “April showers bring May flowers,” but not if you’re in Holly Springs. With springtime’s inevitable rain and humidity, there’s a fresh bouquet of trash to smell every morning. The landfill is by no means a secret, but residents still complain about the odor after every rainstorm, like they had no idea that they were moving next to a 179-acre mountain of pure garbage. NO REGRETS.

Over-Posting About Your Fitness

It’s possible to have fitness goals without posting about it on the interwebs, Todd. I’ve seen way too many middle-aged men develop a “passion” for mountain biking that lasts approximately three weeks. Resist the urge to post your “PR” at Harris Lake after one ride. Is it really necessary to do burpees by the railroad tracks next to the audience of Aviator regulars? Do you have to inform everyone on Facebook that you’re signing up for 5Ks, 10Ks, family fun runs, mud runs, triathlons and Ironman competitions? Do I really have to drive by jacked dudes in ice baths outside of Crossfit on my way to the Mason Jar Lager Company? Actually I’m fine with that, carry on.

If you haven’t received a thinly veiled threat about the state of your lawn from the HOA, have you even lived? Warmer weather equals overgrown grass and weeds popping up faster than Karens at the Target customer service desk. If you haven’t hired a lawn care company (ie. you live in Fuquay instead of Holly Springs), then good freaking luck keeping up with the Joneses. Nothing says springtime like one-percenters getting inspired by a landscaping show on PBS. Be ready to throw down with Hank at the Home Depot Garden Center over the last rotating sprinkler.

Questions About Prom and Graduation

“Is $750 too much to spend on a prom dress?” Um, unless your 16-year-old is wearing that thing every day for the next ten years, Linda, then THE ANSWER IS YES. Is it really necessary to ask for recommendations for photographers, caterers, bakers and “classy” venues with exposed brick walls for PROM?! Are y’all aware that this is a school dance chaperoned by other parents? Your kid will end up on the back of a squatted truck at COOK OUT with mustard on their rented tuxedo by the end of the night, so calm the hell down. Promaramadrama dies down just in time for parents to start posting questions about where to take their 5th grader for a “graduation trip.” You know where my parents took me after my 5th grade graduation? Home, guys, where I fell asleep on the couch watching “Saved by the Bell.”

OMG, Is That A Test Siren?

This had to make the list because there’s a test siren scheduled for April 8 at the Shearon Harris Nuclear Plant that will last approximately 30 seconds. Thousands of residents will stop what they’re doing, log onto Facebook and ask their neighbors if they’re going to die.

Picture this. You’ve had a long, tiring week, and you’re lying peacefully in your bed at 6:35 a.m. on a Saturday morning. The birds are chirping; the sun is creeping over the horizon, and you’re ready to doze off again. The sweetest dream of a traffic-free Judd Parkway has just begun when you hear your neighbor, Hank, crank up his $1,500 riding lawn mower to cut his .24 acres of grass. He’ll be done with his edging by 8 a.m., but it’ll be followed by at least four hours of organizing his man cave while blasting Metallica from his open garage. GOOD TIMES.

It’s almost time for the Fuquay-Varina Police Department’s annual post about who NOT to call in the event of a snake sighting. Every year completely clueless confused residents mistake garden hoses for copperheads and have the FVPD on speed dial, because clearly, snakes need to be arrested and charged with a crime. (Y’all need to call animal control instead).

But…But…Who Will Take My Trash!?

Spring cleaning is in full swing, and local Facebook groups are inundated with questions about who will haul away the garbage that’s currently sitting by the curb. NEWS FLASH! There are waste and recycling convenience centers all over the area that accept cardboard, clothing, construction and food waste, garbage, mixed recycling, scrap metal and more, so put it in the back of your Honda Odyssey, and take your busted crap to the dump yourself.

“Can You Believe This Weather?!”

Why do people act like N.C.’s drunk weather doesn’t happen every single year? Kids are wearing hoodies with shorts and flip flops, and everyone in Fuquay is praying for hail so they can finally replace their busted 2005 Corollas, so yeah, I can believe it. 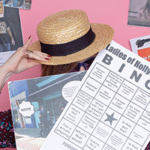