The founder of Aviator Brewing Company finds them tedious and, in many cases, unnecessary. Doble much prefers the mix of hands-on ingenuity, aggressive growth and good fortune he’s employed over the last 11 years developing one of the most well-known brands in southern Wake County.

How then, did a homebrewer in an airplane hangar create a regional brewery producing 18,000 barrels of beer annually and three prominent downtown restaurants? Doble may eschew a business plan, but that doesn’t mean he isn’t constantly planning. 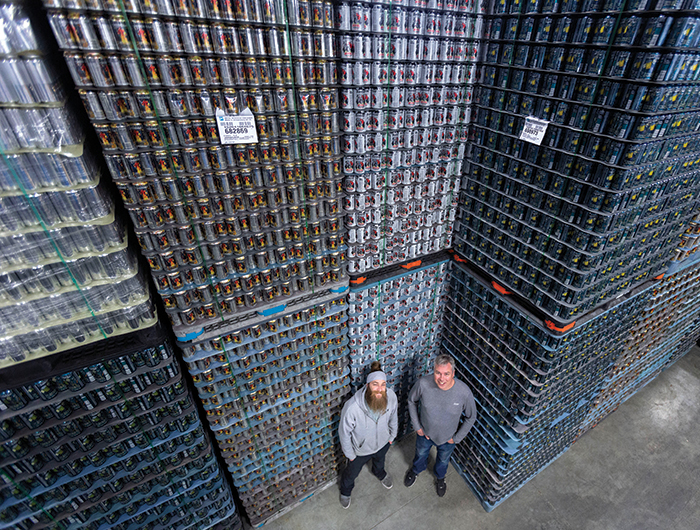 A short drive into downtown Varina lands you in the apex of Aviator territory, starting with the Aviator Tap House occupying the old Varina train depot on East Broad Street.

Across the street sits Aviator SmokeHouse, open since 2011, serving their signature smoked wings and a variety of other hickory-smoked meat-centric “sandwiches and stuff.” 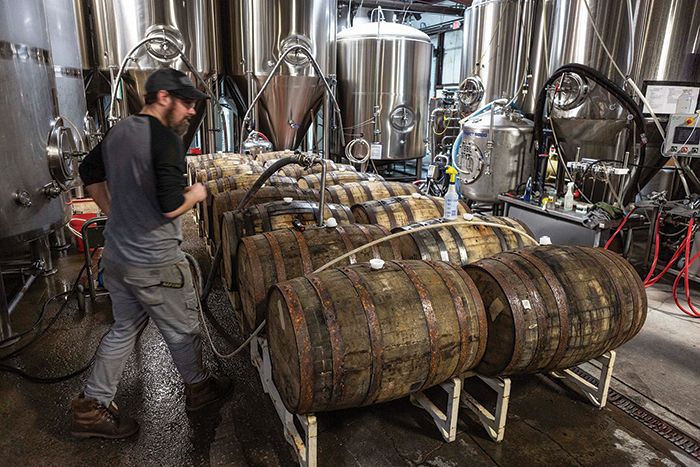 Next door is the newest Aviator enterprise, the Aviator Pizzeria & BeerShop, an upgrade to the original bottle shop, serving thin crust, made-to-order pizzas. The pizzeria’s rooftop bar may be the pinnacle of the Aviator kingdom, giving patrons an insta-worthy, sunset-over-the-railroad-tracks view from two-stories up. 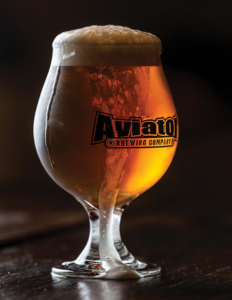 “I think we do a good job of making things a little bit different,” says Doble. “I put things in the restaurants I would like, and we really try to cater to families. Having different venues makes it fun to go out.”

Aviator’s foundations were forged early in Doble’s life, as a teenager living in Europe. Doble’s father served in the Army, and their family lived in towns in Belgium and Holland during his adolescence.

Doble discovered homebrewing through a Flemish neighbor and grew up enjoying the casual fellowship of enjoying afternoon drinks with friends.

“We lived on the border near Cologne. We would drive into Germany on motorcycles, go hang out around the Cologne cathedral and drink beer all day instead of going to high school,” Doble says with a grin. “It’s a big part of life. That’s where my love of beer came from.”

“I came back to the states when I was 20, and I had no idea there was even a drinking age.” 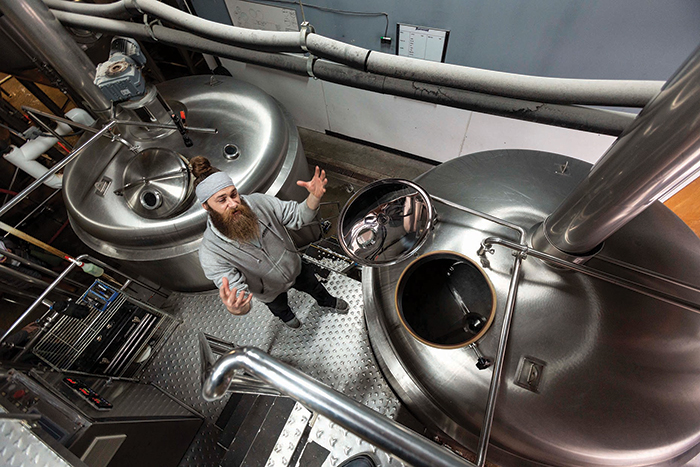 Doble’s beer-drinking inclinations didn’t stop him from earning a master’s degree in electrical engineering from Georgia Tech, landing a job with HP and eventually settling in Holly Springs.

Meanwhile, Doble revived his love of homebrewing in an airplane hangar at the Triple W airport in Fuquay-Varina, a building he already owned to store his self-made airplane. 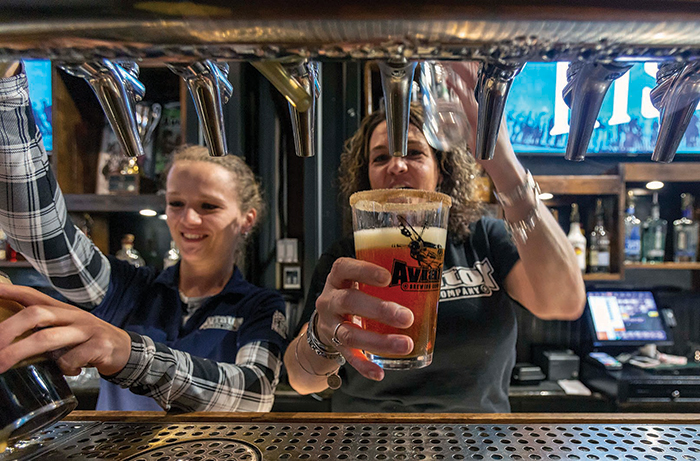 “If you didn’t know it was there, you wouldn’t have found it,” says Kim Poling, an original customer of the hangar and still an Aviator regular. “A friend of mine knew someone who was brewing beer in an airplane hangar. That’s how I found it.”

“I travelled around the country loading used equipment on an 18 wheeler — old dairy tanks from Montana, a used brewing system from the Bay area,” Doble says. 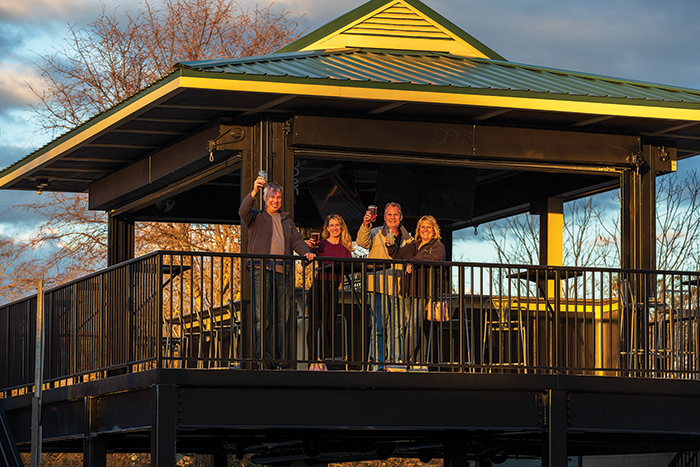 Sunsets at the pizzeria’s rooftop bar are not to be missed.

“Sourcing equipment directly and being smart about the way we spend money, that’s how we grew,” he says.

“One of our big advantages is we do everything. We don’t hire out anything. When we designed and built a canning line, we put the whole thing together ourselves and wired it. That saves us a ton of money.”

“Mark is knowledgeable and hands-on. I’ve learned a lot from him,” Gentry says.

Drawing inspiration from culinary combinations, Aviator works to “think of weird ingredients that no one is using,” Gentry says, such as those in the Cocoa en Fuego chocolate chili porter or the Creamsicle Push Pop Ale.

Most mornings, you can find Doble, drill in hand, fixing, troubleshooting and training at the brewery, bars and restaurants, or renovating the Aviator apartments above the SmokeHouse.

“Everybody thought it was crazy,” says Doble of the six apartments he rents through AirBnB. “We just finished our first full year and are in the top one percent for rental and occupancy.” (Add landlord to the list of hats Doble currently wears.)

“We are very aggressive with expansion. We get really bored not doing anything,” Doble says. “And I think that’s where the money is long term. It’s like playing Monopoly — at the end of the game, the guy with all the houses and hotels, he wins. That’s where I got my business education.” 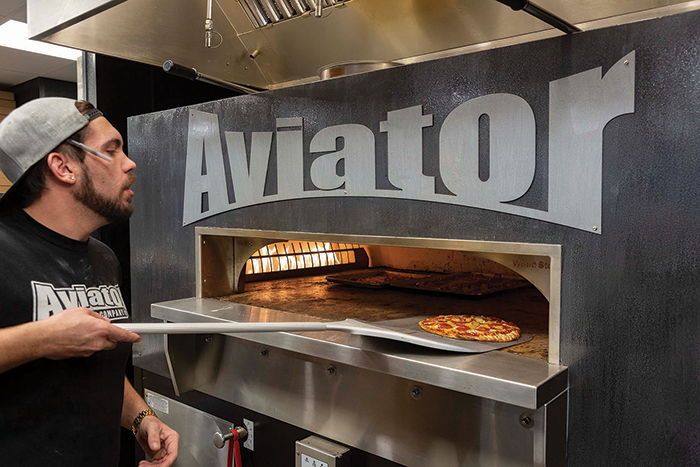 Pizzas are made right before your eyes at the Aviator Pizzeria’s open kitchen.

If downtown Varina is Aviator’s Monopoly, then their first “hotel” may be mere months away, coming to a five-acre site on North Street (behind and down from the pizzeria). Once permitting is approved (hopefully this spring), construction on a whole new Aviator brewery destination will begin. Plans include multiple bars and restaurants, a coffee shop, outdoor concert venue and the Aviator distillery.

Nov 2012
Builds a canning machine and begins canning HotRod Red, HogWild IPA and Devils Tramping Ground Tripel, and all of its seasonal beers

“When we move, the brewery production capability will quadruple, but it’s all automated,” Doble says. “The same guys can produce that beer. We worked with the company that makes the brew houses for Heinken to design a new brewing system.”

“It’s been challenging to get a permit to build. Construction is quick and easy — 10 months. Once we start construction, then basically, we’re done,” Doble says.

The town has been very supportive of our growth. … It’s very different to have something like (the new brewery) in the middle of a town. It takes some people with vision to see that.”

Looking further into the future, Doble wants to expand into Holly Springs, then eventually establish restaurant locations across North Carolina and the southeast.

“We’re going to own all of our distribution. So when we send beer to South Carolina, we’re sending it to our restaurants,” he says.

“We’re going right to the customer. That’s where the money is, and it’s more fun.”

Everybody Knows Your Name

“A lot of people think we are this huge business. We’re not. We’re just a small, local business, and we like to build stuff,” says Doble.

The tangible representations are seen all over Broad Street, but there is also a unique intangible sense of community built through Aviator’s hyper-local presence.

Before the Tap House kitchen was installed, servers used to carry food from the SmokeHouse to the Tap House, like a friendly neighbor rushing over a cup of sugar. There is a distinctive close-knit atmosphere — in part because of proximity — among all the Aviator locations, like you are popping from house to house checking in on your relatives.

This Aviator family includes a group of regulars that can be found at the Tap House daily from about 4:00 to 6:00 p.m., known jokingly as “the brewery elite,” says server Chasity Locklear. 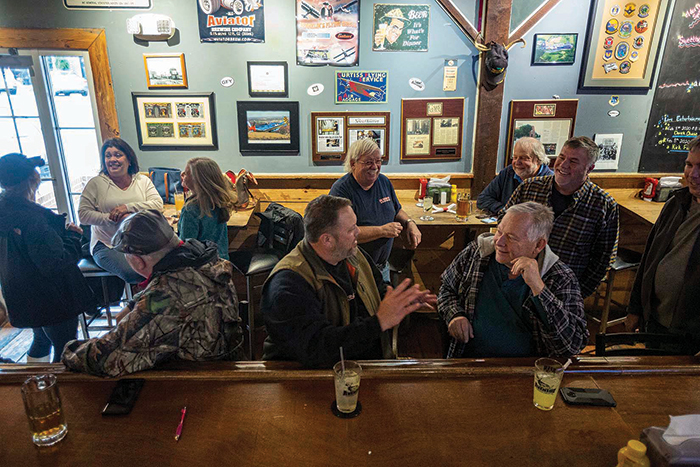 The “4 to 6” crew of tap house regulars fill the bar daily.

“They own the end of the bar,” she says.

“Somebody’s got to keep the power bill paid,” says Shannon Warren, one of the “4-to-6” crew. “It really is like Cheers, where everybody knows your name. I even had my wedding reception here in the Tap House.”

Regulars such as Bob Sodan, who only lives a mile away, doesn’t even drink beer anymore, but still visits every day with the crew. And Dave Glidewell, who can be seen mingling at the bar, casually lifting french fries from friends’ plates. It’s clear that many patrons feel at home and among family.

“Fuquay is very community driven,” says Doble. “The people that live here focus on local products. That drives them into the local restaurants.”

Critics may claim that Aviator grew too big too fast, doing so without regard for the larger Fuquay-area small business community. But Doble maintains that growth — everyone’s growth — is beneficial for all.

“The area is really starting to grow, and we love all the other bars and restaurants in the area. We go on social media, and see people saying, ‘You are trying to put someone out of business.’ But we don’t want to put anyone out of business! We want everyone there. It creates a downtown, a place people want to be.”