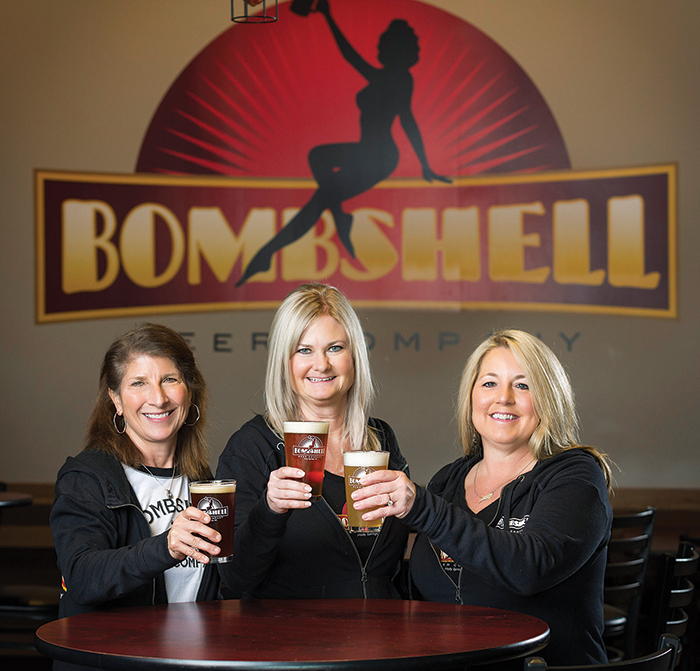 These days, North Carolina’s first female-owned microbrewery has a lot to celebrate. Winning a bronze medal at the Great American Beer Festival mere months before their sixth anniversary was a moment that Bombshell Beer Company owners Jackie Hudspeth, Ellen Joyner and Michelle Miniutti will not likely forget.

Bombshell By The Numbers

15% of pint sales donated to community causes on Fundraiser Fridays

66 entries in the wood-and-barrel-aged beer category

“We were competing against some of the biggest names in the business,” says Miniutti, of the three-day festival that took place in Denver last October. Bombshell’s Bourbon Barrel Aged Lady In Red earned the bronze medal in the wood- and barrel-aged beer category.

“To win any medal — gold, silver or bronze — that puts your name on the map,” says Hudspeth.

Main & Broad sat down to meet the team behind this Holly Springs hot spot and learn how they got started and have adapted to suit ever-changing consumer demands.

Jackie: We all live in the same neighborhood; we have known each other for 10 years. Ellen was a home brewer. Everybody thought that was cool.

Michelle: We were looking for the right business opportunity. One day all the stars pointed in the same direction. We realized there were hardly any women in the microbrewing industry, and we should look into starting our own.

Michelle: We knew we wanted to open the brewery in Holly Springs, since we all three lived here. We knew that breweries were really a cornerstone element in a lot of communities, and we wanted to grow our business to be intertwined with the community.
Jackie: We’ve had so much support from our friends. People feel like they are at Cheers. Everytime you come in you see someone you know. 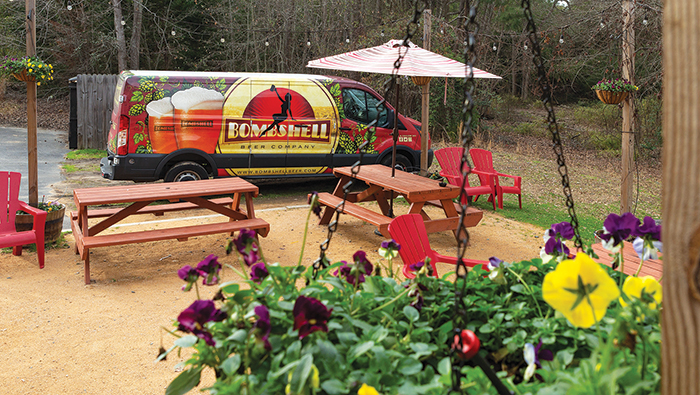 Michelle: Our business plan was founded on a flagship beer model, where you have one beer that you are known for. That model is toast. The industry is all about what’s new today. One advantage that we have as a small brewery is we have the flexibility to change beer styles pretty rapidly.

Recently named one of the USA Today 10 best women-led breweries and distilleries.

Jackie: Nobody wants to buy the old staples; it’s all about what’s new.

Michelle: We had planned to be a distribution brewery, where we would be sending the vast majority of the beer that we produce out the backdoor to bars and restaurants. What has happened in the industry is that the taproom has grown tremendously. People want to come to a brewery and experience that type of environment. We didn’t make our taproom big enough.

Jackie: Beer is super fresh when you go to a brewery. You can taste a difference. And we have a great family-friendly environment.
Michelle: Being women-owned has never been a roadblock for us. We’ve felt a lot of support. When we go to craft brewers conferences, there have always been open arms even though we don’t have a big beard and wear Carhartts. 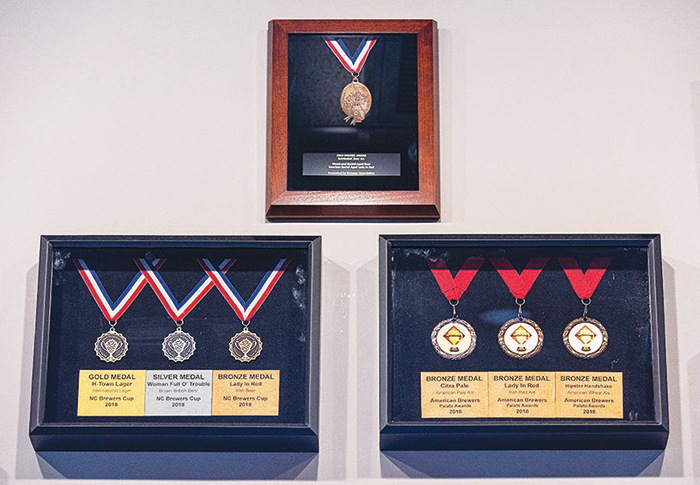 Numerous awards hang inside the bombshell beer company tap room. atop them all rests the bronze medal from the 2019 great American beer festival for the bourbon barrel aged lady in red.

Ellen: It’s hard being an entrepreneur, period. Your mind is always on the business whether you’re here or not. There are a lot of sleepless nights, thinking about everything that needs to get done. Coming from the corporate world, we’ve created processes. Sometimes people think they are too rigid, but when you are growing as fast as we are, without them we’d be floundering.

Michelle: Everything that we’ve accomplished has been through the blood, sweat and hard work of our employees and us as owners, and the support of our community. We want to continue to have our employees grow and develop. We want to become a great company to work for.

Ellen: Another great thing about being all female-owned — when you say you can’t meet because you have to get your hair done, everybody understands.