Stepping out for a cool treat?

We hope you meet these sweet Holly Springs families dishing up a cold dose of happiness like it’s their job. Because it is. 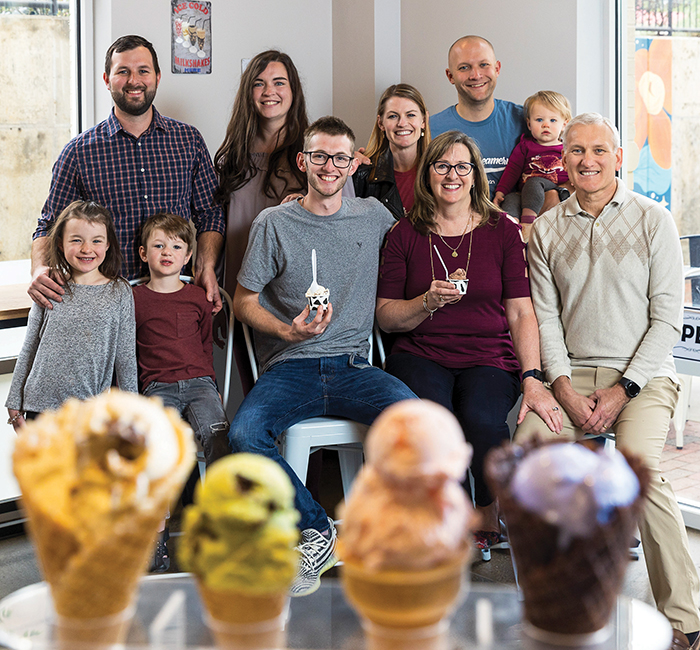 The homemade ice cream at JT’s Creamery is a labor of love, one the Belt family wants to share with all the residents of Southern Wake.

“We use all-natural ingredients and real fruit; the dyes come from vegetables,” says Wendy Belt. “It is an all-natural, premium ice cream.”

“When we lived in Chicago, we went to an ice cream parlor every Friday night. We’d walk up and down Main Street. A lot of memories came from that,” says Wendy. “We wanted our (ice cream parlor) to be like that, a destination, where you would not just grab a cone, but sit back and relax and enjoy it with family and friends.”

The location at The Block on Main was a perfect fit, adjacent to the amphitheater, with plenty of room for cornhole, Connect 4, and chalk drawing, plus an ideal way to start or finish a stroll through the other shops and restaurants filling up the flourishing downtown district. 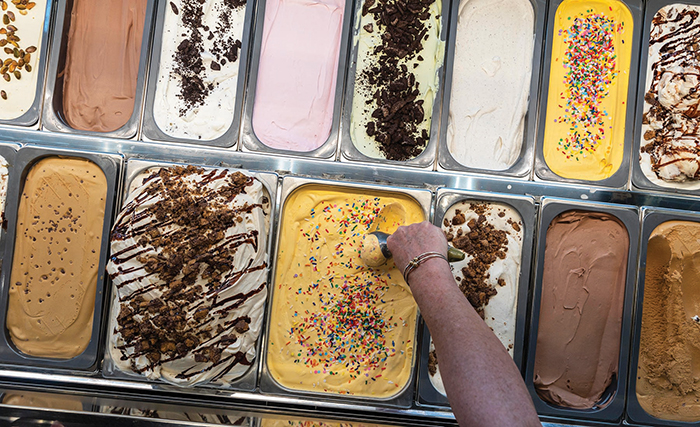 Three generations of Belts live in Holly Springs now, and Ben Belt, eldest son of Tom and Wendy, calls that “a big I told you so.”

Ben and his wife Hannah moved to Holly Springs eight years ago on a whim. Next came Ben’s sister Brittany and her husband Jon, who moved to the area when Brittany attended graduate school at Duke University. 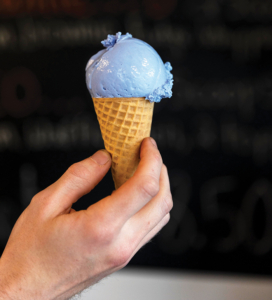 Wendy and Tom followed two and a half years ago, relocating from New York to be closer to their two oldest children and three grandchildren. When the pair decided to open the creamery, they asked their youngest son Josh to join them as a partner, effectively relocating the last of the Belt children to Holly Springs. (Josh is the “J” in JT’s Creamery; Tom is the “T.”)

The culinary expert of the endeavor, Josh worked in multiple kitchens in New York, garnering experience and inspiration, which he used to develop the menu for JT’s Creamery.

“It was a dream to run the shop down here,” says Josh. “We are serving happiness in a cone.”

Josh is especially proud of the Blue Milk flavor, inspired by Star Wars blue milk, but he won’t give away his signature recipe.

“People have so much fun trying to figure out what flavor it is,” he says. “No one has guessed it so far.”

Tom and Wendy are excited to put down roots in a new community surrounded by their own family and spread their love of ice cream with the families of Holly Springs and Fuquay-Varina.

With her granddaughter Ivy perched on one arm, and a cone of strawberry ice cream in the other hand, Wendy says, “They grow up very fast. Time is moving very quickly.” 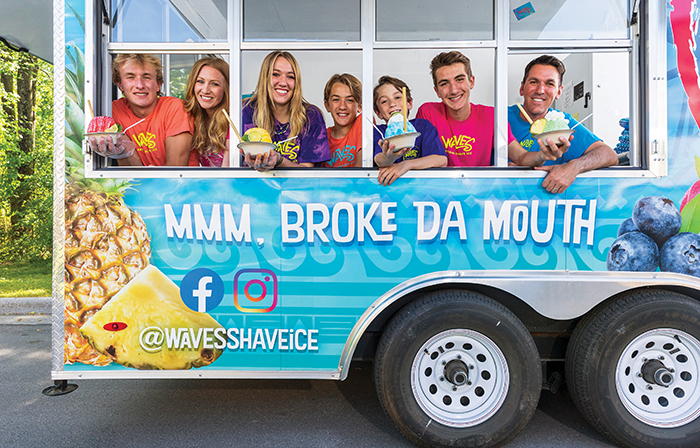 As newlyweds on honeymoon, Rachael and Clint Boyle fell in love with Hawaii — the gorgeous scenery, the island vibes, and the traditional cuisine enticed them back many times.

“We listen to Hawaiian music at home. I just love the whole feel of it,” says Rachael Boyle. One particular Hawaiian specialty, shave ice, caught Rachael’s eye years later on the mainland.

Living in New Mexico at the time, Rachael would frequently see a line, even in winter, outside of a local shave ice shop.

“It was so simple, but people loved it. I thought, this can be done on steroids, with higher quality and more creativity,” she says.

“There is nothing like it here,” says Emma Boyle, the eldest of the five Boyle children at 18 years old.

“We wanted a family business the kids would work on with us,” says Rachael. “They are old enough to make money. We wanted to teach them about entrepreneurship and good business skills, but in a way that we could fit it into our own schedule.”

Fluffy shave ice molded around a scoop of ice cream, then topped with fruit syrups and creamy drizzles.

“It’s fun to work on the truck,” says 15-year-old Evan Boyle, “You only get happy people ordering shave ice.”

Even the youngest two siblings, Luke and Preston, can work when, and if, they want.

“They like getting paid and earning tips, too,” says Rachael.

Each family member has a role in creating the traditional Hawaiian delicacy.

It starts with ice cream in the center, then fluffy shaved ice is packed around and doused with homemade fruit syrup. Creamy drizzles, whipped cream, and toppings can be added before the mounded bowl is handed over to the customer.

“People are skeptical of the ice cream in the middle,” says Rachael, “I say, ‘Trust us. We’ll make you a new one if you don’t like it.’” (Your trust will be rewarded — it is phenomenal.)

The family makes many of the syrups from fresh fruit. Mango peach is an ongoing favorite.

“When we started, there were flavors like dragon fruit and passion fruit, flavors I didn’t know,” says 12-year-old Preston. “Now I think they are so much better than strawberry.”

Everyone agrees, there is an art to the ice, which requires precise care while freezing and shaving to get the perfect powdery texture.

“It takes three to four days for a block to freeze. It has to freeze at a higher temperature so there are no crystals in it,” says Evan.

“There is a perfect window for shaving. You have to take it out of the freezer, but it can’t be too cold or too wet to get the perfect shave.”

The Boyles want their shave ice to be as authentic as in the islands, importing syrups and toppings, and hoping each of their customers experiences that Hawaiian “Broke Da Mouth” feeling.

“It’s not a snow cone,” says Rachael. “This is so much better than a snow cone.” 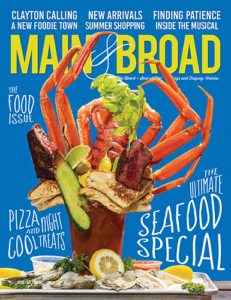