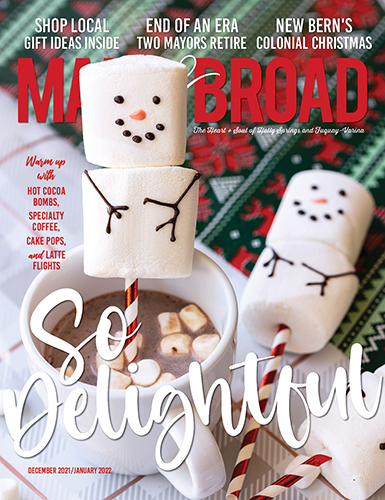 Jeff Ross has a doctorate in molecular biology. During his career as a scientist, he led a group of cancer researchers for the Environmental Protection Agency. Jeff’s wife Lisa is an infectious diseases expert working in the pharmaceutical industry. (I know, I’m impressed, too.)

You won’t find Jeff in a science lab these days. Jeff and Lisa are also the owners and creative minds behind Piedmont Pottery, a young pottery studio and gallery on Main Street in downtown Fuquay, a dream they’ve been working toward for close to 40 years.

“We always had the long-term plan that when I retired, we’d open up a gallery and studio,” says Jeff Ross.

During his college years, Ross took a course in ceramics and fell in love with the art of pottery. Jeff met Lisa making pottery, and the two have been working the craft together since the mid 1970s.

“Pottery is challenging and relaxing at the same time. There are always opportunities to explore new forms and create new glazes,” says Ross.

“The chemistry aspects are appealing to me with my science background,” says Ross, showing off a vase he created with a crystallized pattern in the glaze. The unique pattern is accomplished using zinc to grow crystals in multiple cycles before a final firing in the kiln, he explains. 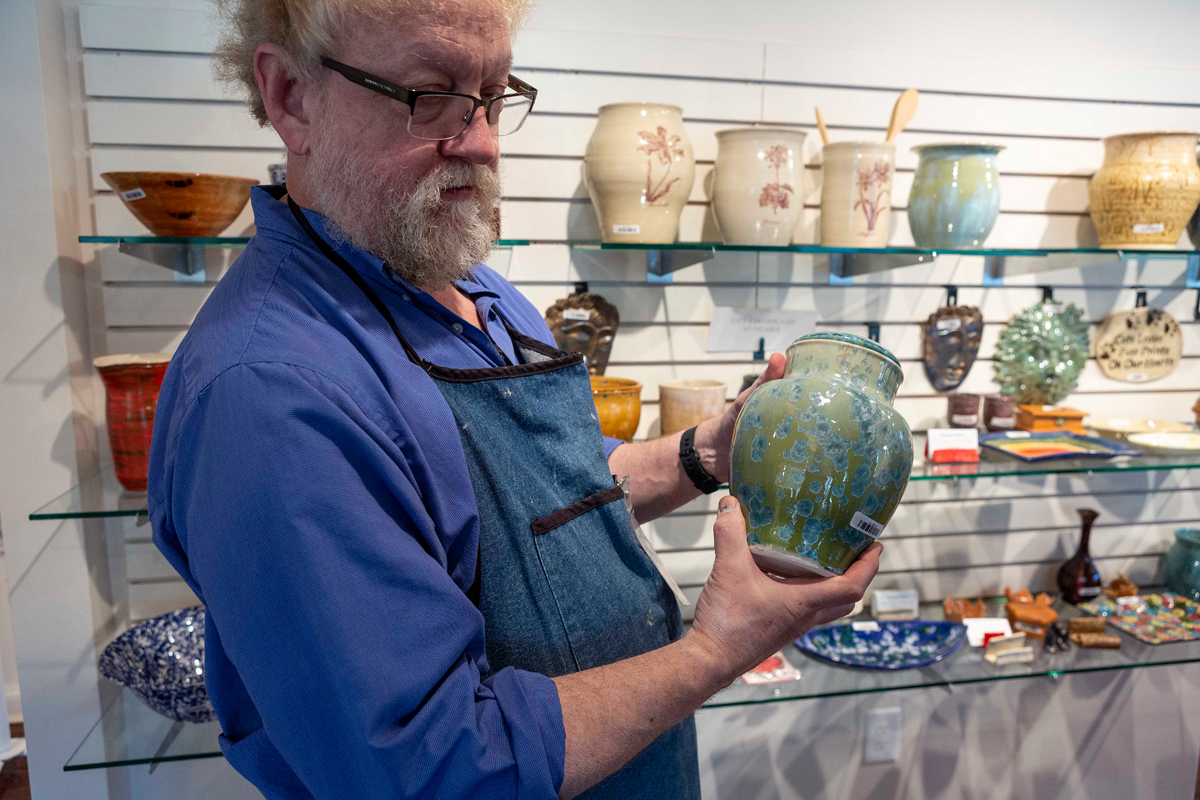 The Rosses started looking for properties several years ago, and settled on Fuquay-Varina due to it’s locally-minded business community and affordability.

“There is nothing just like us here. We’re more than just a pottery studio,” says Ross. Paintings, photography, sculpture, jewelry and gifts are on display in the charming yellow and red building next to Fainting Goat Brewery, much of it is made by the Rosses and other area artists. Pottery and photography classes are offered, as well as a selection of premade pottery that can be painted onsite.

“Over the years doing craft fairs and shows, people would ask, ‘Do you do teach lessons?’ There is a definite community interest.” 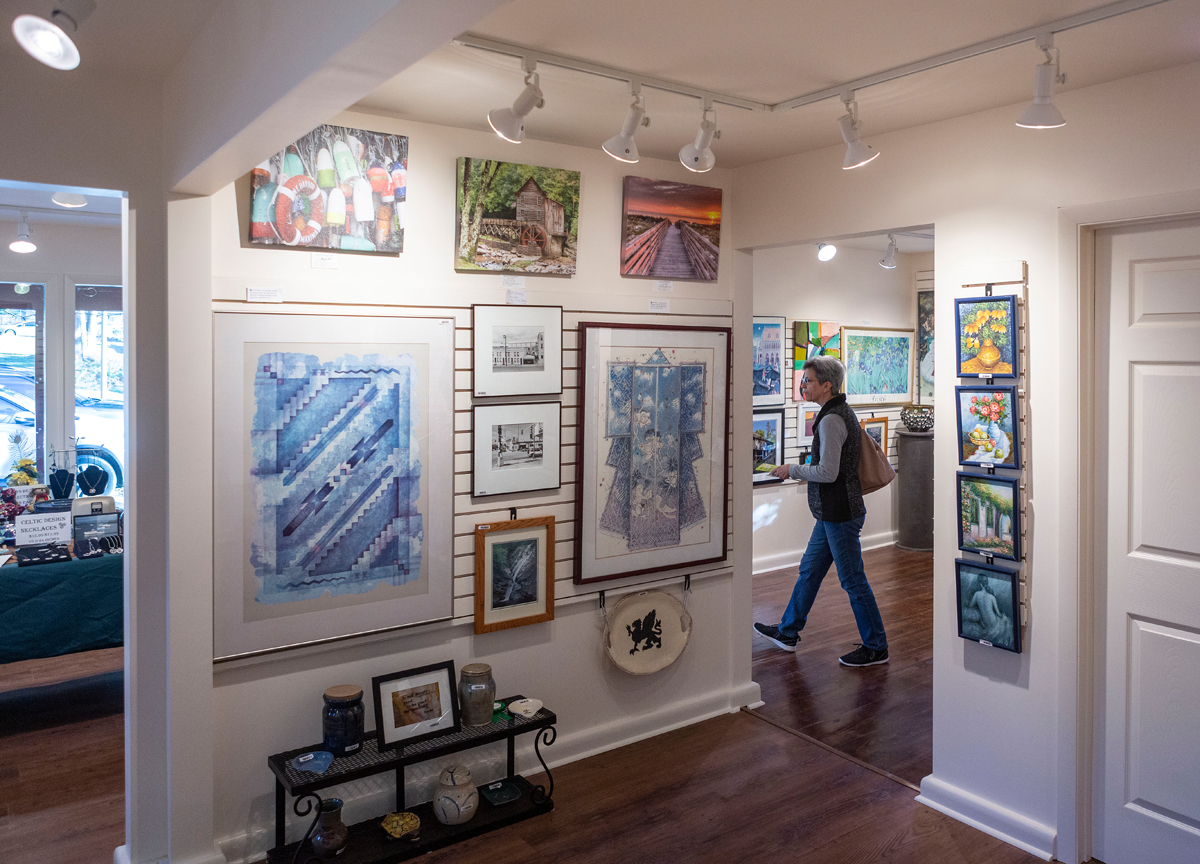 “We have a strong focus on arts education. I spend a lot of time in my classes going over the fundamental basic techniques — step-by-step of what you need to do to be successful,” Ross says. 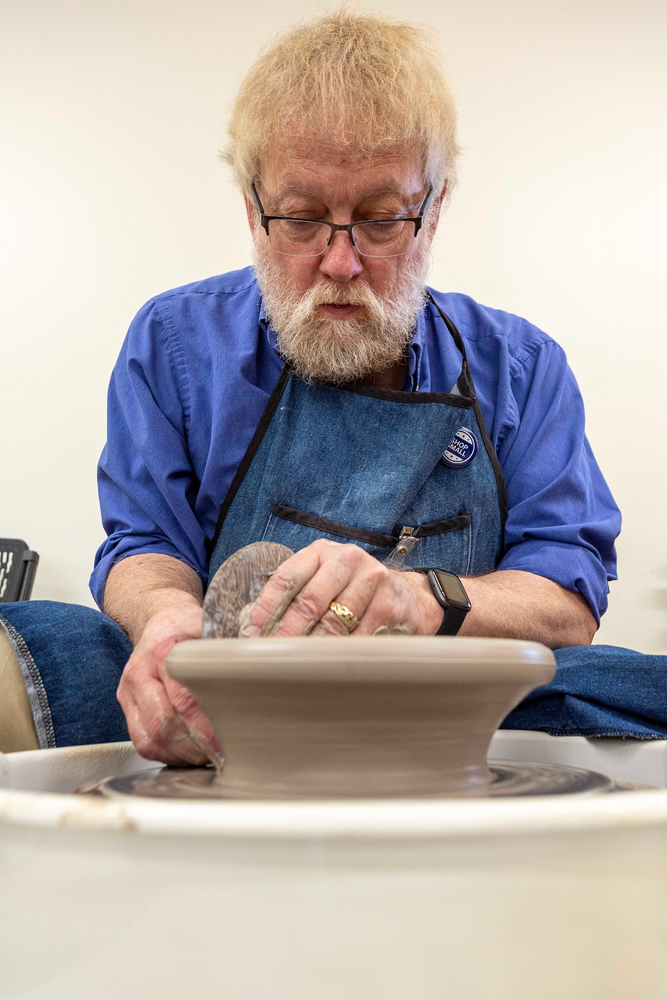 Jeff Ross at the potter’s wheel

The Fuquay-Varina Arts Center is only a couple blocks away, which Ross sees as an advantage.

“The Art Center does a lot of 2D art, but they don’t have the facilities to do what we do with pottery. We see ourselves as being complementary to what they do,” he says.

All pottery starts with preparing the clay for working, to make sure it is uniform throughout. Beginners often use hand building or coil techniques. Experienced potters advance to throwing on the wheel.

“The wheel is a little more difficult to do, but in many ways it’s more rewarding. It’s what people think of first when they think of pottery.”

The final steps of drying, glazing, firing and cooldown often take much longer than the time required to shape an item. Two onsite kilns can reach temperatures of 2200 degrees.

For the more casual artist, bisque painting (decorating a premade item) or monthly ladies night events are a good option.

“There is a different craft project each month. We have complimentary wine, soft drinks and snacks. It’s kind of a party; people have a blast,” Ross says.

“There is something inherent in people to want to express themselves in art or to appreciate art,” says Ross. “But a lot of people have no idea how to approach it. We like to have different ways to introduce people to 3D art.”

In the future, the Rosses hope to be a part of creating an arts district in the downtown Fuquay area. Anchored by the Arts Center, an arts district would include additional galleries, workshops and special events to encourage arts appreciation. 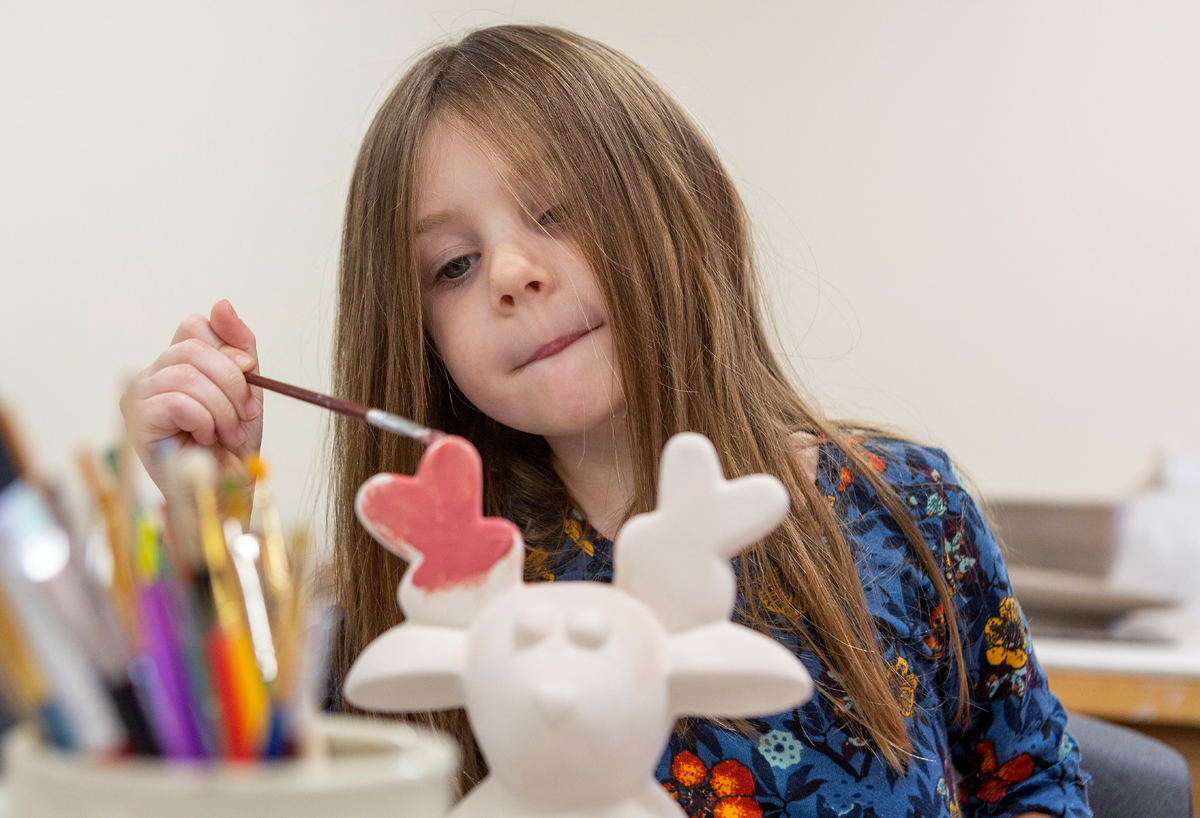 Drop-in bisque painting is fun for adults and children, such as four-year-old Autumn Audibert.

“If it becomes a destination the way Seagrove is, an arts district supports the local economy more than people buying pottery. It brings people into the town; they are going to be buying gas and lunch. It improves the image of the town.”